Motorists will soon be able to use bitcoin and other cryptocurrencies to pay for their fuel and other in-store purchases, with convenience giant OTR finalising plans to become Australia’s largest crypto-accepting bricks and mortar retailer.

In a sign of digital currencies entering the mainstream, some 170 OTR outlets across South Australia, Victoria and Western Australia will begin accepting crypto payments from July.

OTR’s parent company Peregrine Corporation, owned by the wealthy Shahin family, will also accept crypto at its C Coffee, Subway, Oporto and Wokinabox outlets, and at its Smokemart and Giftbox stores. 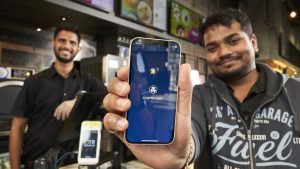 Peregrine is working with Singapore company Crypto.com and merchant payments platform DataMesh to roll out new crypto-enabled point of sale terminals across its retail network.

Crypto.com manages digital wallets and operates one of the world’s largest cryptocurrency exchanges.

The launch of the Crypto.com Pay Merchant service will allow OTR customers to pay with their cryptocurrency holdings via the Crypto.com app, with real-time conversion into Australian dollars at the time of the transaction.

A merchant fee of 0.5 per cent is charged to the vendor, while the fee paid by customers will depend on the exchange rate at the time.

According to IBISWorld, Peregrine is South Australia’s largest privately-owned company, and eighth largest in Australia, with annual revenue nudging $3bn.

While most of its OTR stores are in SA, it also has several outlets in regional Victoria, and earlier this month opened its first store in metropolitan Melbourne. It has identified Western Australia and Victoria as key regions for growth in the short-term.

The company’s executive chairman, Yasser Shahin, said the plan was in response to the rapid growth of cryptocurrencies.

“The growth and mainstream acceptance of cryptocurrency adoption in Australia and the rest of the world has been phenomenal, and has offered us a clear opportunity to tap into the momentum of this fast-growing space for the benefit of our customers,” he said.

A recent Crypto.com survey found that 60 per cent of merchants had an interest in accepting crypto payments this year, much higher than the 4 per cent that currently had the capability.

According to the survey, 75 per cent of Crypto.com members wanted to use their digital currencies for day-to-day purchases.

Karl Mohan, Crypto.com’s local general manager, said the company was in talks with several other retailers and major institutions who had also shown an interest in cryptocurrencies.

“This is mainstream now, no longer in the fringes,” Mr Mohan said.